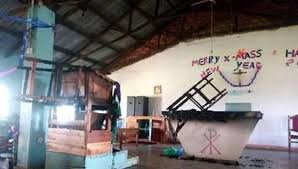 Kenya – It is Sunday, February 14, at 9 AM in Otamba, Kisii County. It is a cool but bright day as ICC visits the sites of recent attacks in Western Kenya.

The residents of Otamba move throughout the community as they head to their respective places of worship. Pastor Charles Mayore begins his service as he always does by leading morning prayers at the Worldwide Gospel Church, a charred, broken building with a gaping hole in the back. Those entering the building sit on borrowed primary school wooden desks or the few plastic chairs that survived the attack. Charles thanks the Lord for keeping the saints strong in the faith just one month after an arson attack that destroyed their sanctuary.

ICC spoke to Charles about how the church has been recovering from the devastating January fire. He narrated the horrific incident, “Our church was attacked on the night of January 14. It was among the first churches to be burned down together with the Seventh Day Adventist Church just across (the street). Neighbors raised the alarm when they saw the flames. The fire was too huge to be contained immediately, but with the help of water from the SDA church, which was also burning, Christians managed to put it out. But we lost everything that was in the storage; chairs, cabinet, registers, Christian literature, tables, and one side of the roof.”

Charles continued, “The first two Sundays after the church was burned down, believers were scared about attending worship. We kept praying and encouraging them, and now we meet every Sunday for usual worship services. Others have not yet resumed worship because we do not have enough chairs. We have been able to replace just ten new chairs against a church membership of one hundred and six. We also borrowed a few wooden desks from the nearby primary school to use as we trust the Lord for new chairs.”

A few kilometers from Worldwide Gospel is the Otamba Pentecostal Church. As you enter the church, members sit in groups, attending their morning classes before the general worship service. Speaking with ICC, Pastor James Ondima, head pastor of the church, said, “We never stopped our usual meetings. Before the security agents could visit and file a report of the extent of the attack, we used to meet outside for services. We did this for two weeks, but now we are back to the church building. We have replaced a few things, although we are yet to replace the scorched iron sheets, interior curtains, the lectern, and other items that were burnt to ashes. The believers have remained steadfast, and we have also seen our membership grow. The new members are convinced that the churches are being targeted for speaking the truth of the gospel.”

Shortly after leaving Worldwide Gospel church, ICC walked across town to St. Augustine Catholic Church Otamba, where the Seminarian is finishing his sermon outside of the church building. Over 200 members are seated patiently in the cold, hoping that their church building will be ready soon. Afterward, the Seminarian had a word with us. “The attackers cut the grill of one of the windows to find entry and set ablaze the items in the priest’s altar. With the help of the Lord, we have replaced everything and also repainted the church. The only reason making us worship from outside is that the Parish leader has not come to dedicate the replaced items. We hope this shall be done in the coming few days.”

It was not just these three churches that were attacked, though. Nyangeni SDA church and the Holy Spirit Church were also set ablaze that same day in early January. Despite this destruction, all five Otamba churches are still meeting weekly for worship regardless of the losses and shock they’ve endured.

The Nyangeni SDA church has been unable to replace all of the items burned inside their office. “We lost a lot of things inside the church office; office chairs, cabinets, Bibles, hymn books, Christian literature, communion vessels, tables, etc. We are waiting until Easter to begin raising money to replace these items, one by one. We do not want to burden the members who are still reeling from the effects of the arson attack and the difficult life during this season of Coronavirus. We can only ask for prayers, and we trust the Lord for strength and provision.” Explained the elder in charge.

When the attackers failed to gain entrance into the Holy Spirit Church, they resolved to burn the church bathroom. The leader, Pastor Linnet, thanked God, saying, “They did not burn the items inside the church that we had sacrificially gathered for many years. It would have taken us back a great deal. We also trust God that we shall be able to build another toilet”.

This wanton destruction of so much property shows the extreme hatred the attackers have for the gospel. It is unclear who these attackers are or why they targeted these churches. Despite this, we want to lift them up in our prayers, asking God to forgive them and to turn their hearts to Christ. Likewise, please pray for the churches that have lost so much. Thank God for his faithfulness and steadfastness throughout these ordeals and that the Christians would more fully know and love Him through these challenges. 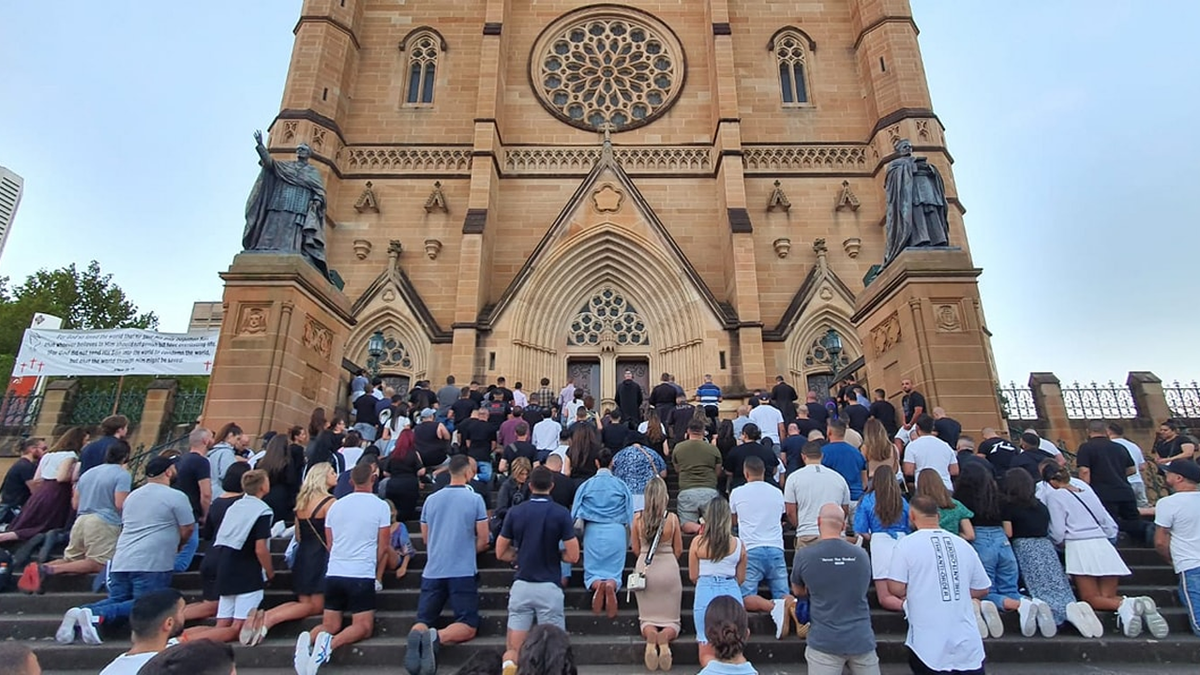 The City of Sydney is running a month-long series of outdoor “Sunset Piazza” concerts in the publicly-owned St Mary’s Cathedral forecourt in the inner-city.

As part of the series, event producers Heaps Gay put on their Live N’ Queer concert on Saturday evening.

The promoters described the event as a “chaotic queer variety show” featuring some of the year’s “loudest and queerest acts”.

However an ad used by Heaps Gay to promote the show featured an illustration of the adjacent St Mary’s Cathedral, outraging Christians.

Last week, the city council pulled the ad after a complaint from the Sydney Catholic Archbishop Anthony Fisher.

On Saturday night, the group of “Christian Lives Matter” protesters gathered on the steps of the Cathedral ahead of the concert.

The protesters chanted hymns and held up religious banners as the Heaps Gay concert went ahead nearby.

Heaps Gay concert ‘makes a mockery of Christianity’
Christian Lives Matter organiser Charlie Bakhos claimed the concert organisers were making a “mockery of the Catholic Church and Christianity in general”.

“Time to really show up and defend our church and our faith. The most powerful way is through prayer,” he said on Facebook.

LGBTIQ activist Sally Rugg shared a photo of the religious protest on Twitter “for allies to see”.

“As LGBT people arrived for a dance, they were met with a large protest against our existence, under the title of ‘Christian Lives Matter’,” Rugg tweeted.

“I don’t want to amplify this group’s message. But I do want people to see this, because this is LGBTQ people’s constant lived experience.

“We live our lives with constant reminders that many people believe we don’t or shouldn’t exist.”

Last week, the city council pulled the ad after Catholic Archbishop Anthony Fisher criticised the “insensitive” use of the church.

“The Cathedral Forecourt is council land and not church property. [The] decision about the content of the concert and its advertising is unfortunately not ours to make,” Archbishop Fisher said.

“We have asked City of Sydney to remove the Cathedral image from the advertising.

“It is frustrating and upsetting that St Mary’s Cathedral, the mother church of Australia, has been used so provocatively to promote this event and such little sensitivity shown to people of faith.”

A City of Sydney spokesperson said the council had ordered the removal of the ad to “avoid any confusion”.

“In the lead-up and throughout the staging of [the events], the City consulted and liaised closely with St Mary’s Cathedral representatives,” they explained.

“There is no place for hate, intolerance or the sowing of division,” she said.

“As we seek to recover from the pandemic, we will continue to host inclusive, accessible and safe events.”

The City of Sydney is running a month-long series of outdoor “Sunset Piazza” concerts in the publicly-owned St Mary’s Cathedral...

The number of inmates killed in riots at three separate prisons in Ecuador this week has increased to 79, authorities...

The US president on Wednesday revoked a ban on the issuing of green cards by his predecessor that lawyers said...