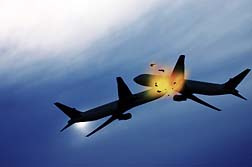 ONE person was killed after two small planes crashed mid-air in the capital of Ottawa, Canadian paramedics say.

Ottawa police said the accident occurred over the west end of the city just after 10am local time on Sunday (2am Monday AEDT).

Staff Sgt. Jamie Harper said one plane crashed into a field and the other managed to land at the Ottawa International Airport after the collision.

A spokesman for Ottawa paramedics, Marc-Antoine Deschamps, said one person who was in the plane that crashed in the field was pronounced dead on the scene.

According to radio station Newstalk 1010, the victim is an 82-year-old recreational pilot.

Deschamps said no one in the other plane was reported to have injuries.

The Transportation Safety Board of Canada said the plane that landed at the airport sustained minor damage.

Police said it is not yet known how many people were aboard either aircraft.

Related Topics:Featuredmid-air plane collision
Up Next