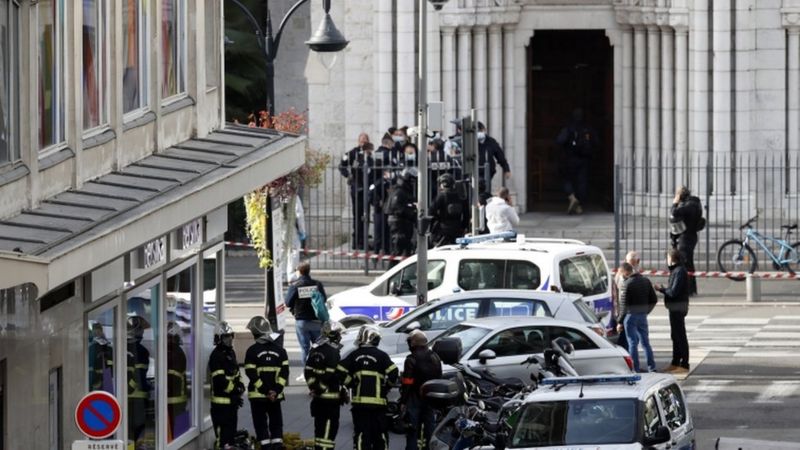 Three people have died in a knife attack at a church in Nice, in what French President Emmanuel Macron said was an “Islamist terrorist attack”.

He said France would not surrender its core values after visiting the Notre-Dame basilica in the southern city. An extra 4,000 troops are being deployed to protect churches and schools.

In Nice, one elderly victim was “virtually beheaded”, officials said. Another woman and a man also died.

A male suspect was shot and detained.

Anti-terror prosecutors have opened an investigation into the attack and France has raised its national security alert to its highest level.

Mr Ricard said the suspect was a 21-year-old Tunisian national who had arrived in France earlier this month. He had a document issued by the Italian Red Cross.

Police sources earlier named the attacker as Brahim Aioussaoi. They said he had travelled by boat from Tunisia to the Italian island of Lampedusa in September. He was placed in coronavirus quarantine there before being released and told to leave Italy.

Two other attacks took place on Thursday, one in France and one in Saudi Arabia.

A man was shot dead in Montfavet near the southern French city of Avignon after threatening police with a handgun.

A guard was attacked outside the French consulate in Jeddah in Saudi Arabia. A suspect was arrested and the guard taken to hospital.

Speaking after visiting Nice, President Macron said: “If we are attacked once again it is for the values which are ours: freedom, for the possibility on our soil to believe freely and not to give in to any spirit of terror.

“I say it with great clarity once again today: we won’t surrender anything.”

The president said the number of soldiers being deployed to protect public places across the country would rise from 3,000 to 7,000.

Mr Estrosi compared the attack to the recent murder of teacher Samuel Paty, who was beheaded close to his school outside Paris earlier this month.

Police have not suggested a motive for the attack in Nice. However, it follows days of protests in some Muslim-majority countries triggered by President Macron’s defence of the publication of cartoons that depicted the Prophet Mohammed. There have been calls in some countries for a boycott of French goods.

All three were attacked inside the basilica on Thursday morning before the first Mass of the day.

Two died inside the church: a 60-year-old woman who was “virtually beheaded”, and a 55-year-old man whose throat was cut.

The male victim was a lay member of staff responsible for the upkeep of the church. He reportedly had a wife and two children.

Another woman, aged 44, managed to flee to a nearby cafe after being stabbed several times, but died later.

It later emerged that a witness had managed to raise the alarm with a special protection system set up by the city.

Chloe, a witness who lives near the church, told the BBC: “We heard many people shouting in the street. We saw from the window that there were many, many policemen coming, and gunshots, many gunshots.”

Tom Vannier, a journalism student who arrived at the scene just after the attack, told the BBC that people were crying on the street.

Four police officers arrived at the scene at 08:57 local time (07:57 GMT) and the attacker was shot and detained shortly afterwards, the French anti-terrorist prosecutor said.

Four years ago Nice was the scene of terrorist attack, when a Tunisian drove a truck into crowds celebrating Bastille Day on 14 July, killing 86 people.
Sourcves:BBC News 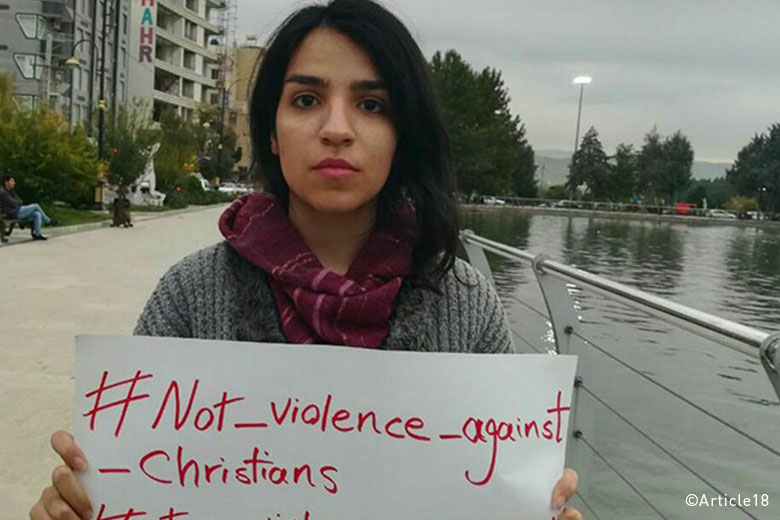 Iran – Mary Mohammadi, an Iranian Christian convert and human rights activist, was arrested again on January 18. Mohammadi has been in and out of prison for her identity as a Christian and outspoken activist.

Most recently, she was arrested by the “morality police”, claiming that she improperly wore her hijab, her pants were too tight and her coat was unbuttoned. Iranian officials previously charged her with the same accusations. She spent six months in jail for being a member of a local house church, and also spent time in prison in April 2020 after participating in a peaceful protest.

Despite her good relationship with her employer, she has also been unable to return to work since her release last year. According to Mohammadi, it is clear that her employers receive pressure from intelligence officials to not take her back. Her life has now been interrupted several times for her identity as a Christian, with the Iranian government not allowing her to return to her normal life, even after serving her undeserved prison sentences.
Sources:persecution 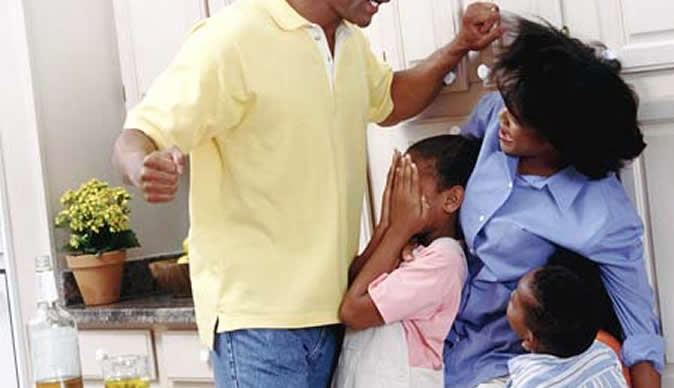 Kenya – On January 13, 2021, Mansitula Buliro experienced visions of Jesus, calling for her to follow Him, amid her Muslim evening prayers. Her husband believed her to be possessed, but she was curious to know who Jesus was.

Buliro inquired about her visions to her Christian neighbor for hours, praying. She knew Jesus was real and put her complete faith in Him. Suddenly a neighbor knocked on the door. He discovered Buliro praying as a Christian and left immediately.

She returned home to an angry husband. “I kept quiet. [He] started slapping and kicking me indiscriminately. I then fell. He went inside the house and came back with a knife and started cutting my mouth, saying, ‘Allahu akbar,’ (God is greater), I am punishing you to not speak about Yeshua in my house. This is a Muslim home!”

Her screams, along with her children’s cries, alarmed the neighbors who stopped the attack. He divorced her on the spot and threatened her he would kill her if she did not leave.

Buliro miscarried her 13-week-old baby as a result of the attack. According to Morning Star News, she lives with a Christian family.
Sources:persecution

Kenya – On January 13, 2021, Mansitula Buliro experienced visions of Jesus, calling for her to follow Him, amid her...

Indonesia has named a Christian as the new national police chief, the third person from the religious minority to hold...