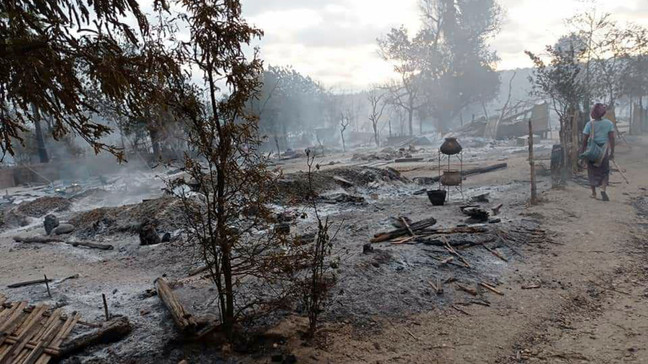 Myanmar – In a “clearance operation” aimed at eliminating the opposition in Chin state, the Burmese Army (Tatmadaw) set an entire village on fire—including a Baptist church and a dozen other buildings— before arresting several civilians.

The fighting between the Tatmadaw and Chinland Defense Forces (CDF) has intensified since August. As a Christian stronghold, Chin state has resisted the Tatmadaw for its discriminatory stance against ethnic minorities and Christianity since the February coup. For this, the junta reinforced its offensive by transporting heavy weaponry and deploying troops to Chin state.

On October 13, while the fighting intensified across the main highway between Hakha city and Falam town in the north, a military convoy, with more than 80 trucks, have arrived in Mindat town – the southern town of Chin State.

The Tatmadaw convoy was attacked about three miles outside of Falam by the CDF militia, sources told Radio Free Asia’s Myanmar Service. In response, the military junta arrested four civilians, including a 13-year-old minor at Hniarlawn village.

The soldiers set up camp in Rialti village after the clash, not far from where the convoy was attacked, and began setting buildings ablaze. The Chindwin News also reports that the soldiers were seen looting the properties and killing animals such as pigs, goats, and hens.

A religious leader from the Rialti Village Baptist Church, who spoke to RFA on condition of anonymity out of fear of reprisal, said that the military initially burned eight homes around 3:00 p.m. on Wednesday, before continuing to set buildings on fire Thursday morning.

“This morning, it was the church and our warehouse—those two were set on fire earlier this morning and at about 9:00 a.m., the remaining three houses,” he said.

Salai Za Op Lin, deputy executive director of the India-based Chin Human Rights Organization, confirmed to RFA that the military had burned down the Baptist church and other buildings in Rialti village and called the act a “war crime,” for the Tatmadaw has deliberately violated religious freedom targeting the Chin Christian communities.

According to UCA News, civilians from ethnic regions, including predominantly Christian areas in Kayah, Chin, Kachin, and Karen states, have borne the brunt of the renewed conflict where people have long faced oppression and persecution under iron-fisted military rule for more than five decades. 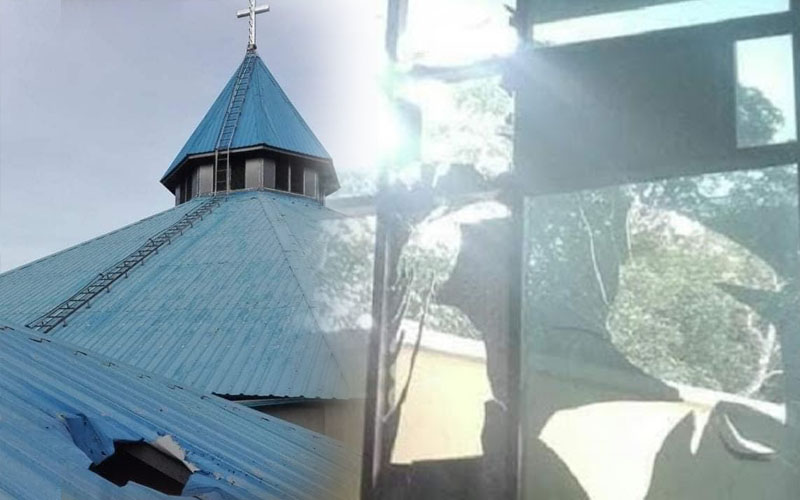 Yangon– Churches have been targeted by the Myanmar military in two separate incidents.

In the eastern Chin State, where for months fighting has pitted local ethnic militias and Myanmar’s ruling junta, a Baptist church was completely destroyed along with some houses in Rialti, a village a few miles from the city of Falam.

According to a witness who spoke to Radio Free Asia, the attack was a reprisal after an army convoy was ambushed by Chin militias on Wednesday.

When residents saw the soldiers arrive, they fled into the forest, from where they saw their homes and church burn.

A junta spokesman denied the claim, saying that “It’s not right to blame the military every time something happens during a battle”, adding that the military in Myanmar “are rebuilding religious buildings that were destroyed by fire”.

Conversely, from India, the Chin Human Rights Organisation confirmed the incident, calling it a “war crime”, pointing out that other Christian churches have already ended up in the army’s crosshair.

On the same day, shelling hit the Catholic Church of the Immaculate Conception in Phruso, a city in the Diocese of Loikaw, in the western Kayah State,

The building, which was built four years, ago, suffered damages to the roof and the walls. No one was killed or wounded.

The military deliberately targeted the church since it was far from other buildings, Father Wilbert Mireh, a local Jesuit, told Radio Veritas.

This is the fifth Catholic church in the Diocese of Loikaw to be shelled by the army since repression began after the 1 February coup.
Sources:AsiaNews

In a bid to encourage a “baby boom,” advocated by Mizoram’s churches and civil society organisations, the state’s sports minister...