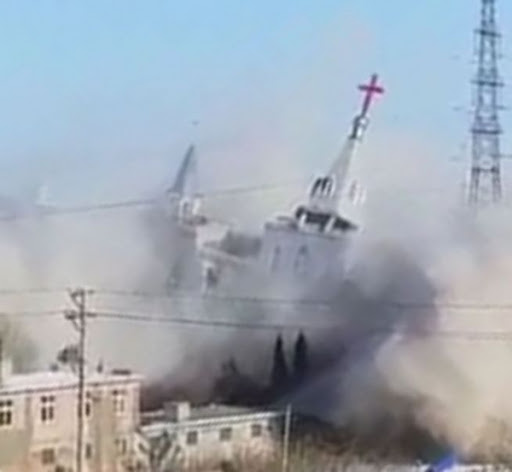 International Christian Concern (ICC) has learned that on June 11, local authorities brought in more than 100 officers from four different agencies to demolish Xingguang Church in China’s Xiamen city, Fujian province. The demolition came a month after the violent May 3 raid of the house church, during which several members were injured.

Around 9:00 a.m., dozens of chengguan, or Urban Management Law Enforcement officials, lined up outside of Xingguang Church in Jimei district, before storming the church located on the fifth floor with other dozens of fire fighters, public security officers, and religious affairs bureau staff.

The house church, purchased by the members and also the home of several members, was soon was reduced to rubble. Since the authorities barred the church members from entering, when a churchgoer managed to record the demolition, a chengguan yelled, “What are you filming with your cell?” while attempting to knock away the phone.

Preacher Yang Xibo from Xunsiding Church, shared his anger on Facebook. He said, “Xiamen Xingguang House Church now encounters a forceful demolition, which targets a private property, someone’s home. The Property Law [in China] is nothing but a wastepaper. The government of Xiamen has been gansterized…This also gives you a glimpse of how China has been gansterized in recent years.”

The church has already been raided twice this year – on April 19 and on May 3. The church’s preacher, Titus Yu, was threatened with a notice that his church would face disbandment as punishment if he did not correct his ‘illegal’ act.

A house church pastor from Zhejiang told ICC, “As far as I know, I haven’t heard about the arrest of Xingguang Church’s preacher [as part of the demolition].”

Gina Goh, ICC’s Regional Manager for Southeast Asia, said, “As stated in the latest United States Commission on International Religious Freedom’s (USCIRF) report by commissioner Johnnie Moore, ‘There is no question that China is the world’s foremost violator of human rights and religious freedom.’ China’s rule of law is merely a slogan, since the authorities can simply crack down on anyone whom they consider a threat. We regret to see the Xiamen authorities’ continuous oppression against Xingguang Church. This serves as a great example of the absence of religious liberty in the communist country.”
Sources: Persecution