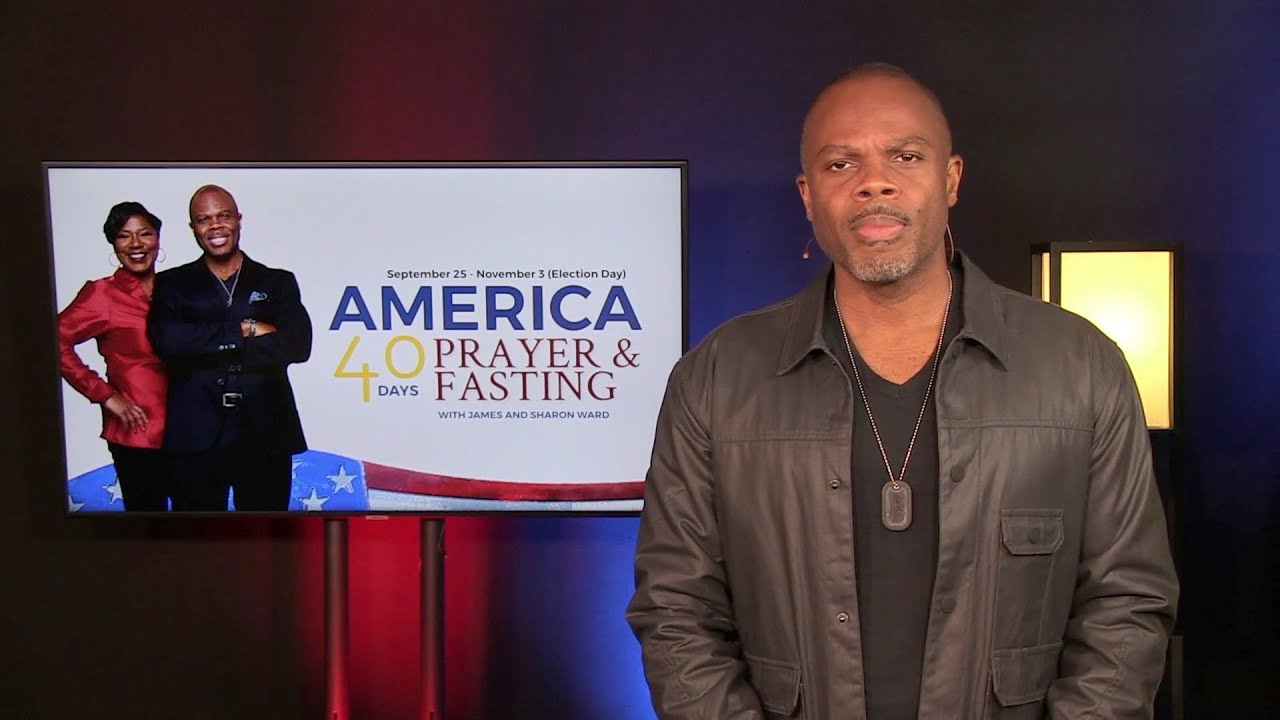 Insight Church Pastor James E. Ward Jr. says he is on a mission to bring racial healing to the nation and “God’s blessing to black America” through 40 Days of Humility, Prayer, and Fasting. And he’s hoping America will join him.

The Skokie, Illinois, preacher recently catapulted to the national stage through his connection to Julia Jackson, one of his most devout parishioners and mother of 29-year-old Wisconsin father Jacob S. Blake, who was shot multiple times by a police officer in Kenosha on Aug. 23. Blake is currently “in a spinal injury rehabilitation center in Chicago.”

His shooting was one of several primarily deadly encounters between black men and local law enforcement that sparked civil unrest over racial justice and inequality since the killing of George Floyd in the custody of Minneapolis Police Department officers in May.

“The issue that we see in society surrounding race, the protest, the rioting, those things communicate to us that there is a serious problem in our nation and unfortunately in most cases we are not … equipped to solve the problem that we know needs to be solved,” Ward told The Christian Post in an interview Friday.

He is convinced that when it comes to race, America is wrestling with a deep-rooted spiritual problem that must be addressed with a spiritual response. And that’s why he launched the national spiritual prayer movement on Sept. 25 that will culminate with a livestreamed prayer for the nation on Nov. 2 from Washington, D.C.

“40 Days asks all Americans to fervently pray and fast before God for racial harmony and healing in America prior to the national presidential election,” the movement said in a statement to CP.

The group has also launched an initiative called the Zero Victim Community Development Corporation, which was “prayerfully designed to restore and strengthen black lives and families across our country.”

“Part of the expression of our prayer is prayer with action and this new Zero Victim Development Corporation is us engaging to act on behalf of what we believe, and really beginning to target how to bring God’s blessing to black America,” Ward said.

Even in a socially disruptive election year when Christians remain deeply divided on issues of race and politics, Ward is convinced that if people are able to humble themselves in prayer, America can fix its race problem.

Blake was shot seven times in the back by officer Rusten Sheskey on Aug. 23. The Wisconsin Department of Justice said that a woman called 911 to report that her boyfriend was present and was not supposed to be at the residence. According to audio dispatch obtained by Madison365, Blake had taken the woman’s keys and refused to leave.

When officers arrived at the scene, they encountered Blake, who resisted arrest. They unsuccessfully tried to subdue him with a Taser and Blake then walked around to his vehicle at the scene with armed police officers pointing their guns at his back, according to video posted on social media. Blake opened the driver’s side door of his vehicle and leaned forward. While holding onto Blake’s shirt, the Wisconsin DOJ said Sheskey fired his service weapon.

Blake’s family said the shooting has left him paralyzed from the waist down.

Wisconsin DOJ officials said Blake “admitted that he had a knife in his possession.” It was recovered on the floorboard of the driver’s side of the vehicle.

Brendan Matthews, the attorney representing Sheskey, told CNN that the officer fired the shots because he believed Blake was trying to kidnap a child as he heard a woman say, “He’s got my kid. He’s got my keys.”

There were three children in the back of the car at the time of the shooting.

In an op-ed for The New York Times Thursday, Jacob Blake’s uncle, Rick Blake, described the invisible toll of the shooting on his family, including his brother Jacob Blake Sr., affectionately called “Big Jake.”

“Our story is different from those of many families whose lives have been devastated by police brutality — our Li’l Jake survived. But in mostly every other way, the experience is similar. When the cameras stop rolling, the lights fade and public attention turns away, we’re left with our pain and we return to the battle against racism and for justice and reform,” Rick Blake wrote.

Rick Blake described how his brother, who suffers from diabetes, heart disease and chronic neuropathy, was forced to venture out during the pandemic from his home to support his son in the hospital and how he paid dearly for it with his health.

“The toll on my brother has gone largely unnoticed — except, of course, by members of our family. One night, he sat in the dark on a rock next to the hotel where he was staying, so sick and tired he couldn’t move, his hand swollen to the size of a catcher’s mitt from gout. By chance, the director of the hospital where Li’l Jake was being treated found him and he was taken to the emergency room for treatment,” he explained.

When asked about the Blake family’s revelation, Ward replied: “I think for those of us who have never been through something like this, there is no way to imagine what it feels like.”

Julia Jackson has been leaning on her faith while continuing to support her son’s recovery.

“I know it has to be one of the hardest things that Julia has every dealt with and she’s constantly in need, and I would say Jacob too, of prayer and I think that’s one of the roles that her church family plays for her. Having a church family, having a prayer team that she’s a part of, she has a core group of people around her that are there to encourage her spiritually, emotionally and mentally,” Ward said.

He argued that when shootings like Blake’s occur, people can sometime lose sight of the human toll they bring when they are criticized and politicized in the court of public opinion.

“There are so many negatives things spoken around these situations and publicly I don’t think we always give families the space that they need to grieve,” Ward said.

And it’s one of the reasons he believes a new prayer movement is needed now more than ever.

Nigerian authorities are searching for hundreds of schoolgirls who were kidnapped by gunmen in a raid early Friday morning, according to police in the northwestern state of Zamfara.

Police Commissioner Abutu Yaro told reporters that 317 girls had been kidnapped from Government Girls Science Secondary School in the town of Jangebe, according to its principal. He said that efforts to trace the kidnappers and retrieve the students are underway and that authorities were looking into information that they had been moved to neighboring forests.

“All of us are angry, and all of us are sad,” he said. “Despite that we need to have a coordinated response in order to [save lives] and bring the children back home.”

Yaro emphasized the importance of exercising caution and care, and urged people to remain calm. According to local media reports, scores of residents incensed by the abduction stormed the streets of Jangebe, creating roadblocks and using sticks and stones to attack vehicles carrying journalists to the school. A cameraman was injured in the process.

Citing a police spokesperson, Nigerian newspaper Punch reported that Zamfara State Police Command is working with the military to conduct joint search and rescue operations for the students, who he said were kidnapped by “armed bandits.”

An unnamed school staff member told the newspaper that the gunmen — some wearing uniforms and pretending to be security personnel — arrived at the school with pickup trucks and motorcycles around 1 a.m. on Friday then “broke into the students’ hostels” and “forcefully evacuated” them.

“When they came into the school, we thought they were security personnel, but to our utmost fear and dismay, they started putting the girls into Hilux vehicles and motorcycles then drove out of the school,” the staff member said.

It’s the latest in a string of abductions in northern Nigeria and comes just over a week after gunmen kidnapped 42 people at a boarding school in the north-central state of Niger in an attack that left one student dead. In December, the northwestern state of Katsina saw two mass kidnappings eight days apart.

In a statement issued Friday condemning the attack, UNICEF’s Nigeria representative Peter Hawkins acknowledged the Nigerian government’s efforts to secure the kidnapped students’ release and called on it “and all concerned” to make schools safer.

“This is a gross violation of children’s rights and a horrific experience for children to go through — one which could have long-lasting effects on their mental health and well-being,” he said.

Amnesty International called the abduction a “serious violation of international humanitarian law” that undermines the right to education for thousands of students in the region. It said the abducted students are at “serious risk of being harmed” and called on authorities to take all measures to ensure the girls’ safe return, along with that of all students still in the custody of armed groups.

Most notoriously, some 100 of the more than 270 schoolgirls abducted by militant Islamist group Boko Haram in 2014 are still missing.

“Education is under attack in northern Nigeria,” Amnesty International tweeted. “Schools should be places of safety, and no child should have to choose between their education and their life. Other children have had to abandon their education after being displaced by frequent violent attacks on their communities.”

Two-time Grammy award-winning singer Lauren Daigle has released her latest single, “Hold On to Me,” a ballad with crossover appeal....

Nigerian authorities are searching for hundreds of schoolgirls who were kidnapped by gunmen in a raid early Friday morning, according...

India – According to the Union of Catholic Asian News (UCAN), police in India’s Madhya Pradesh state have charged a...

New Delhi: Allrounder Yusuf Pathan, who was part of India’s two World Cup-winning teams, on Friday announced retirement from all...