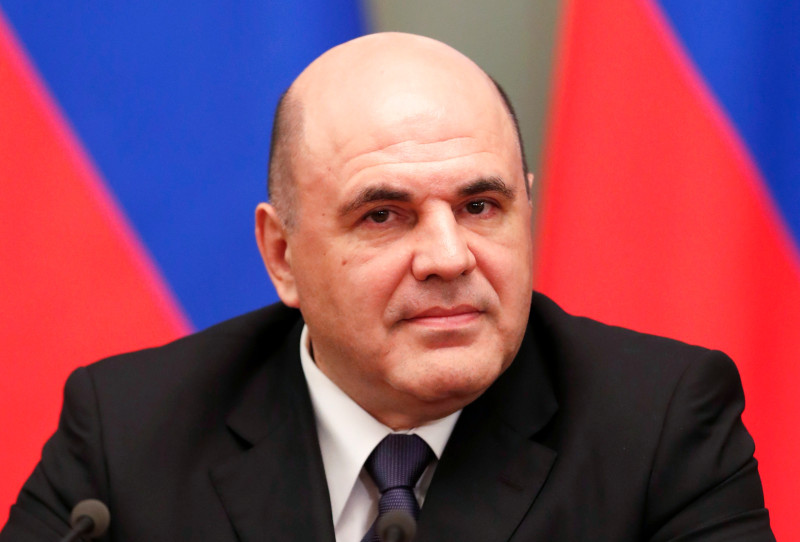 Russian Prime Minister Mikhail Mishustin has been diagnosed with coronavirus, he said during a video meeting with President Vladimir Putin broadcast on the state-run Rossiya 24 television channel Thursday

As the new coronavirus that has killed more than 227,000 people worldwide continues to spread, Russia has stepped up its measures to slow the pandemic’s spread within its borders.

There have been 106,498 cases of coronavirus infections reported in Russia so far and 1,073 deaths.

Russia confirmed 7,099 new coronavirus infections Thursday, bringing the country’s official number of cases to 106,498 and marking a new one-day record increase. Russia is now the eighth most-affected country in terms of infections, having surpassed China and Iran this week.

President Vladimir Putin has extended the national “non-working” month through May 11 as Russia continued to see sharp daily rises in new coronavirus infections in recent days. Moscow’s coronavirus lockdown has also been extended until May 11.

He said the agricultural sector had failed to meet its grain targets due to typhoons last year, which caused flooding.

There are reports that food prices have spiked, with NK News reporting that a kilogram of bananas costs $45 (£32).

North Korea has closed its borders to contain the spread of Covid-19.

Trade with China has plummeted as a result. North Korea relies on China for food, fertiliser and fuel.

North Korea is also struggling under international sanctions, imposed because of its nuclear programmes.

The authoritarian leader of the single-party state talked about the food situation at the ruling Workers’ Party central committee which started this week in the capital Pyongyang.

During the meeting, Mr Kim said that national industrial output had grown by a quarter compared to the same period last year.

Officials were expected to discuss relations with the US and South Korea during the event but no details have been released yet.

In April, Mr Kim made a a rare admission of looming hardship, calling on officials to “wage another, more difficult ‘Arduous March’ in order to relieve our people of the difficulty, even a little”.

The Arduous March is a term used by North Korea officials to refer to the country’s struggle during the 1990s famine, when the fall of the Soviet Union left North Korea without crucial aid.

The total number of North Koreans who starved to death at the time is not known, but estimates range up to three million.

It is highly unusual for Kim Jong-un to publicly acknowledge a food shortage. But this is a North Korean leader who has already admitted that his economic plan has failed.

The problem for Mr Kim is that when he took over from his father, he promised his people a more prosperous future. He said they would have meat on their tables and access to electricity. This has not happened. Now he’s having to prime the population for more hard work.

He is trying to tie this into the global pandemic, and state media reported that he pointed out to party officials that the situation across the world is getting “worse and worse”. With so little access to outside information, he can paint a picture of things being bad everywhere – not just in sealed off North Korea. He also described efforts to beat Covid-19 as a “protracted war”. That signals that border closures are not easing any time soon.

That is the concern of many aid organisations. The sealed border has prevented some food and medicine getting through. Most NGOs have had to leave the country, unable to get staff and supplies in or out.

Pyongyang has always called for “self-reliance”. It has closed itself off, just as it may need assistance and it is unlikely to ask for help. If it continues to push away all offers of international assistance, as ever, it may be the people who pay the price.

A radical Muslim has confessed to police in Uganda that he killed a 70-year-old pastor earlier this month because of Allah’s word to kill all infidels who mislead Muslims by sharing the Gospel.

Olingha was one of the Muslim extremists dressed in Islamic attire who stopped Pastor Obo and his wife on their way home from a market at about 8:30 p.m., his wife, Christine Obo, said.

“Olingha openly confessed to police that he can’t regret that he killed the bishop because he did it in the cause of Allah’s word to kill all infidels who mislead Muslims. He added that Allah will be with him in jail, but the kafiri (infidel) deserved the killing.”

One of the attackers told the pastor, who oversaw 17 churches across the region and had been sharing Christ with Muslims, that he was an “infidel” who caused Muslims to leave Islam and “blasphemes the words of Allah,” and that, “Today Allah has judged you.”

A week before the murder, the couple had invited a former Islamic teacher to testify on how he became a Christian at their church, Christine Obo recalled. Area Muslims were also upset with the church because it offered the former Islamic teacher a pig as part of a micro-enterprise livestock project that helped raise funds for the church, she added.

Describing the incident, she said, “As I moved a few meters in a hurry trying to save my life, I heard a little noise and wailing from my husband and realized that his life was in danger.”

When she reached home, she was trembling and unable to speak, she said, and her children took her to a hospital. When she regained consciousness the following morning, she told her oldest son and his siblings to go to the site.

“Reaching there, they were shocked and fearful as they found a big number of Christians and relatives gathered around the dead body mourning their bishop after being murdered by Muslims,” Obo was quoted as saying.

According to World Watch Monitor, a homegrown Islamist rebel movement organizing in the neighboring Democratic Republic of Congo has emboldened Ugandan radicals to persecute Christians.

Voice of the Martyrs earlier noted that Uganda’s history has made it vulnerable to the influence of Islam as “Arab countries also continue to invest significant resources into furthering Muslim interests in the country.”

In Uganda, persecution is mainly seen in the form of local Islamists persecuting Christians, mostly in areas where “radicals have been steadily encroaching.”

“Radical Islam’s influence has grown steadily, and many Christians within the majority-Muslim border regions are facing severe persecution, especially those who convert from Islam,” a Voice of the Martyrs factsheet explains. “Despite the risks, evangelical churches in Uganda have responded by reaching out to their neighbors; many churches are training leaders how to share the Gospel with Muslims and care for those who are persecuted after they become Christians.”